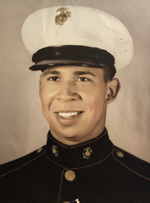 Joe “Pinoy” Lozano of Mission Hills passed away on February 5, 2021. He was born on December 26, 1934 in Pacoima, CA. He was the son of Jose and Aurora Lozano.
Pinoy had a very unique education, he learned in one room schools as well as parochial school. He joined the Marine Corp in 1954, reached the rank of Sergeant and was honorably discharged in 1957. He was a Korean War Veteran.
In 1958 he married Virginia Munoz of Pacoima, CA and they settled in Mission Hills. They had six children, Marie A “Toni” Ramos, of Mission Hills, Jo Ann Noble of Redlands, Joe A. Lozano of Santa Clarita, Vincent P. Lozano of Mission Hills, Patrick Lozano of San Fernando, and Regina Coronado of Granada Hills. Along with their six children they had twenty-one grandchildren (two preceding them in death, Joe A. Lozano Jr. and Alexandria R. “Allie” Lozano), twenty-six great grandchildren and one great great granddaughter. On December 20, 2018 they celebrated 60 years of marriage.
Pinoy was a member of the American Legion - Post 176, The VFW, Marine Corp League and the 50 Plus Club.
In addition to his wife and his parents, Pinoy is preceded in death by his siblings Frances Garcia, of Fresno, CA. Stella Davalos, of Azusa, CA. Salvador Lopez of Santa Clarita, CA. Phillip Lozano of Pacoima, CA and Louis Lozano of Pacoima, CA.
Pinoy is survived by his six children, nineteen grandchildren, twenty-six great grandchildren and four siblings. Mary “Honey” Rodarte, Steve Lopez, Lupe Burgmeier and Edward “Chispas” Lozano.

Burial will be private due to restrictions, thank you for understanding.