To share your memory on the wall of Randy Fleischer, sign in using one of the following options:

Provide comfort for the family by sending flowers or planting a tree in memory of Randy Fleischer.

Provide comfort for the family of Randy Fleischer with a meaningful gesture of sympathy.

Randall Craig Fleischer 1959-2020
World renowned symphonic conductor Randall Craig Fleischer died suddenly and
unexpectedly on August 19, 2020 at his home in Los Angeles at the age of 61.
Known to many as "Monstro", Randy was born o... Read More
Randall Craig Fleischer 1959-2020
World renowned symphonic conductor Randall Craig Fleischer died suddenly and
unexpectedly on August 19, 2020 at his home in Los Angeles at the age of 61.
Known to many as "Monstro", Randy was born on March 14, 1959 in Canton,
Ohio to Frank and the late Barbara Fleischer (nee Raikin). Randy’s loving wife of
38 years, writer/performer Heidi Joyce (nee Sicherman) a native Clevelander, his
beloved 20-year-old daughter, Michaela Peri Fleischer, and his two brothers,
Richard and James, survive him.
Randy graduated from the Oberlin College Conservatory in 1981, and from
Indiana University’s Graduate School of Music in 1985. Following a Conducting
Fellowship at the Tanglewood Music Festival where he studied under Leonard
Bernstein, Randy first came to international attention in 1989 as the Associate
Conductor of the National Symphony, conducting the Dvorak Cello Concerto for
Mstislav Rostropovich’s triumphant return from exile to Russia. More recently,
Randy proudly co-created and conducted Rocktopia, a culmination of Randy’s
lifelong fascination with the fusion of rock with symphonic music, finding the
unexpected commonalities between Beethoven, Tchaikovsky, and Mozart, with the
Beatles, Queen, Pink Floyd, and Jimi Hendrix. Rocktopia ran on Broadway in
2018 and was broadcast on PBS. His longtime experience in such varied musical
worlds led him to working with artists such as Yo-Yo Ma, Olga Kern, Natalie
Merchant, Blondie, Dee Snider, Pat Monahan, Idina Menzel, and Kenny Rogers.
Other prominent works by Maestro Fleischer include the Native American
symphonic fusion commission, “Echoes”, presented at the Smithsonian in
Washington D.C., “Symphony in Step” for StepAfrika, and the tribute to Dr.
Martin Luther King Jr, “Spiritual Journey” written with wife, Heidi, and broadcast
on PBS.
Randy was Music Director of the Anchorage Symphony, the Youngstown
Symphony, the Hudson Valley Philharmonic, and the Flagstaff Symphony. He
was a guest conductor with major orchestras around the world including the Israel,
Hong Kong, Beijing, Moscow, and Los Angeles Philharmonics; the Cleveland, San
Francisco, Utah, San Diego and Seattle Symphony orchestras; the Chamber
Orchestras of Philadelphia and St. Paul, the Boston Pops, New York City Opera,
the Hollywood Bowl and a private concert for Pope John Paul II at the Vatican.
His colleagues cherished his generous, inspiring, and encouraging spirit. He made
it possible for everyone to shine. As the pandemic continued, Randy ached to get
Randall Craig Fleischer, Obituary, Page 2
back to making live music with his orchestras. Dynamic, funny, energetic and
creative, he was a remarkable musician who charmed audiences and inspired
musicians of all ages.
Randy was a beloved and devoted husband, friend, and partner to his wife and
college sweetheart Heidi. They shared the joy of working together on stages across
the country performing Young People’s Concerts they co-created. A devoted
homeschooling parent, Randy joyously played the djembe for Heidi’s Orff
Schulwerk and Theatre Lab classes and hung and ran lights for her students’
performances. With his quick, bright smile, warmth, and genuine connection,
Randy could often be found leading kickball at the community parkday and
throwing epic parties with his family. A model father and mensch, Randy
supported interests of his adored daughter, Michaela, with endless love and delight.
Michaela’s fondest memories of her dad include drawing murals and making up
stories about Captain Underpants when she was three, as well as making their
famous original spaghetti sauce as a teen.
When he wasn’t in tails on a podium, Randy could be found body-surfing with
Michaela at Laguna Beach, walking behind the Disneyland parade to the very end,
making candy parties for his family in the hotel room, working out with his wife,
Heidi, then undoing it with chocolate or cheese fries and falling asleep on the
couch. While Randy was widely acknowledged for his musical compositions, he
was less well-known for his work as a poet. His epic opuses include thousands of
poems to his wife and daughter penned each time he left for the airport and taped
to the bathroom mirror.
Randy would want to be remembered as an incredibly loving and devoted husband
and father, and as a creative artist and visionary who brought people together
through music. Trustworthy, sensitive and steadfast, Randy was beloved by all
who knew him, above all, his wife and daughter who have lost the most caring and
wonderful husband and father anyone could ever imagine. All are richer for
having shared in Randy’s full, though too brief, life of love, music, and joy.
Graveside services were held at the Forest Lawn Cemetery on Sept 17, 2020. A
memorial fund for underprivileged young musicians is being established in his
honor at each of his three symphony orchestras. For more information, please
contact his wife, Heidi, at heidijoyce@sbcglobal.net.

To send flowers to the family or plant a tree in memory of Randy C Fleischer, please visit our Heartfelt Sympathies Store.
Read Less

Receive notifications about information and event scheduling for Randy 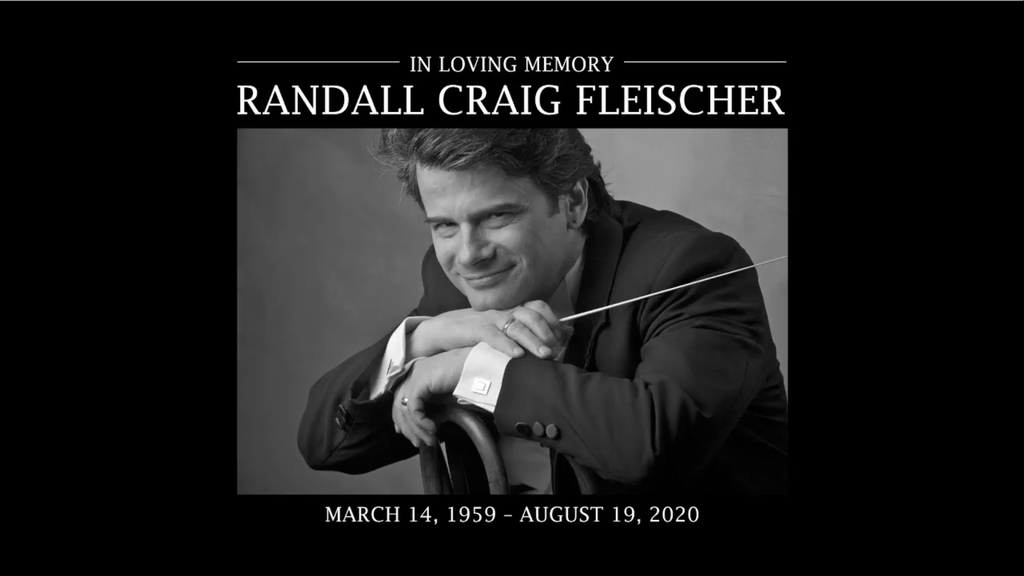 We encourage you to share any memorable photos or stories about Randy. All tributes placed on and purchased through this memorial website will remain on in perpetuity for generations.

We encourage you to share your most beloved memories of Randy here, so that the family and other loved ones can always see it. You can upload cherished photographs, or share your favorite stories, and can even comment on those shared by others.